The Prague Quadrennial is an international exhibition where countries from around the world present their most recent developments in the area of the theatrical arts: buildings, scenery, costumes and productions. The power of ‘Theatre on Location’ and of theatre in general is in a continual state of temporal flux. It is for this reason that the Dutch Pavilion’s presentation was dynamic rather than static.
The pavilion was designed as a hollow sculpture of light, suspended above the ground by a cantilever construction. It shows the contrast between physical theatre space and theatre as an independent phenomenon. The red ‘lantern’, covered with stage curtain cloth, is held up by silvery cantilevers attached to a ‘folded-up’ wooden deck. Computer monitors on the deck give information about the most important developments in the world of Dutch theatre between 1999 and 2003. A narrow staircase leads visitors to the closed space within the ‘lantern’, where projections are displayed ‘en ronde’ . Although it is one single space, acoustical measures give visitors the impression that they are experiencing a number of theatrical settings. The Dutch Paviljoen won the ‘Silver Triga ‘. 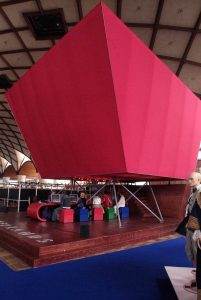 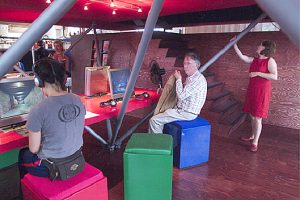